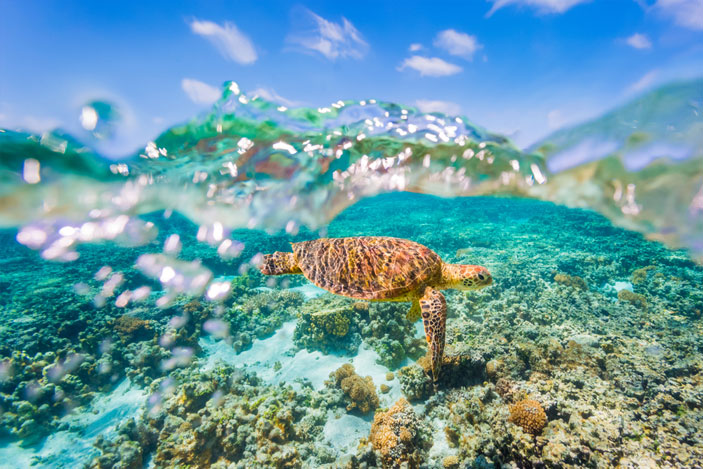 How Big Is The Great Barrier Reef

The Great Barrier Reef is the world’s largest reef system and stretches over 300,000 square kilometres (1800 miles). It’s accessible from the Queensland coast, starting from the southern coastal town of Bundaberg and finishes at the most northern tip of Australia at Cape York. If seeing a turtle is on your bucket list then October is the start of turtle season in Queensland and your best chance to see one. Although turtles are viewable all year round you can’t always guarantee you’ll see one.  The Fitzroy Island Turtle Rehabilitation Centre is a world-class rehab centre dedicated to the rescue, care, maintenance and feeding of the sick and injured turtles.

The centre has now opened its doors to daily tours where you can see the turtles, learn more about them and see the great work these dedicated carers are doing to help bring these turtles back to full health. If you don’t want to miss out on a tour then consider staying at Fitzroy Island or taking a day trip from Cairns. A visit to Cairns simply won’t be complete without spending some time experiencing the Great Barrier Reef.

The Great Barrier Reef is easily accessible using tour operators such as Quicksilver cruises which have Fast Cats leaving from Port Douglas for a variety of half day and day tours. Buses are available from Cairns and the trip takes around an hour while travelling the picturesque Captain Cook highway which features some of the most breathtaking coastal views on your way to the Port Douglas Marina.

If you’d prefer something closer, Fitzroy Island is a 45-minute boat transfer by the Fitzroy Fast Cat (about 30kms) from Cairns and is surrounded by a reef system that forms part of the Great Barrier Reef Marine Park, making it the perfect accessible base for snorkelling and exploring the reef. If you’re looking to stay in Port Douglas during your time in Far North Queensland then Port Douglas is one of the primary locations for viewing The Great Barrier Reef. Port Douglas has a range of options ranging from half day, full day and day sail tours.

Quicksilver cruises have Fast Cats leaving from Port Douglas Marina daily and is a short walk or drive from Macrossan St down to the Marina. If you’re not keen on getting wet then non-swimmers can explore the reef from one of the semi-submersible boats, which cruise one metre underwater (no mask required).

Sailaway offers day and half day sails to the Low Isles and the coral cay and rather than a boat or a pontoon you’ll  be able to experience island time infused with the reef.

You’ll have over 4.5 hours of time dedicated to snorkelling and exploring the island providing you with a strong mix of island and reef exploration. Best Time Of Year To Travel

The Great Barrier Reef is amazing year round and the peak season is between June to October. Keep in mind that while weather conditions are ideal during this time it also features a number of school holiday periods where hotel pricing demand is likely to be much higher. At this time of year temperatures range from 25 degrees to 30 degrees and rainfall is uncommon.

The low season (known locally as the wet or stinger season) takes place between November and May and brings more rain. The stinger season starts from November to May and during this time you may need to swim in stinger enclosures as well as wear a stinger suit which will be made available to you by your tour organisers.

Spring (September – November)
In spring average temperatures range from 20.5 – 29°C (68.9 – 84.2°F). This is the end of the dry season when humidity starts to build with the onset of the wet season from December. In November the reef comes alive with the annual coral spawning. Threats To The Great Barrier Reef

Over the years threats have emerged that have threatened the future of the reef. With a combination of mankind and various natural factors there is concern from biologists and conservationists who do not want to see the demise of one of the most precious natural ecosystems destroyed.

7 comments on “Great Barrier Reef Facts Every Traveller Should Know”