Being completely surrounded by a National Park makes Fitzroy Island a very unique place to stay.  Our cockatoos are found across the whole island year round and are beautiful to see in their natural habitat.  This month we were also able to see some beautiful Green Striped Darner Dragonflies as they are found in greater numbers on the island during December.

Our Turtle Centre is home to some gorgeous resident turtles whom we care for.  These turtles enjoy interacting with their carers’.  Although as visitors you are not able to touch the turtles, you will be able to observe them closely and appreciate their beauty.

Margaret (who is nearly a 100), Rinney and Woodson have so much personality.  Woodson is quite cheeky.  We have observed him hitch a ride on the top of Rinney’s shell on multiple occasions!

On the marine front a Black Tip Reef Shark has pupped. and her offspring have been observed near White Rock.  This shark is considered one of the most beautiful sharks in the Ocean and are seen often by divers since this species prefers shallow waters.

They are not considered dangerous to humans, however as with all marine and animal life they should be respected and left alone.  We have been able to observe these healthy pups every other day and they are doing well.

In fact on one of these regular trips to check on the sharks I had what was without a doubt the greatest snorkelling experience of my life- and it was all due to a Green Sea Turtle.  After spending a bit of time with the sharks, the shallows got too murky and I lost sight of them so I decided to snorkel.

This was the most chilled out turtle I have ever met as she was completely relaxed eating whilst I floated nearby and above her.  At times she seemed to be having some difficulty reaching some of the algae due some coral growths preventing hr access.

I grabbed a few pieces here and there to help. Well, this Sea Green Turtle thought that was wonderful. But she started to get too eager to eat what I found rather than looking for herself- so I started taking photos of her instead and left her to look for her own food source. 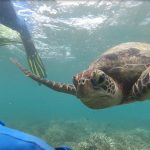 Top row: Eleanor was not a big believer in personal space and I had to push her away from me more than once (screen shots of a video)

Well that wraps up 2016. I’ll leave you with these images of Santa making the most of his time on Fitzroy Island. Santa has a soft spot for this island- he’s made an appearance here every Christmas Day for the last five years. 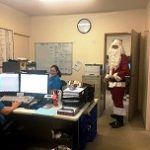 Santa had a wonderful time travelling the island and meeting all our guests; he even stopped to have a dance on our dance floor.