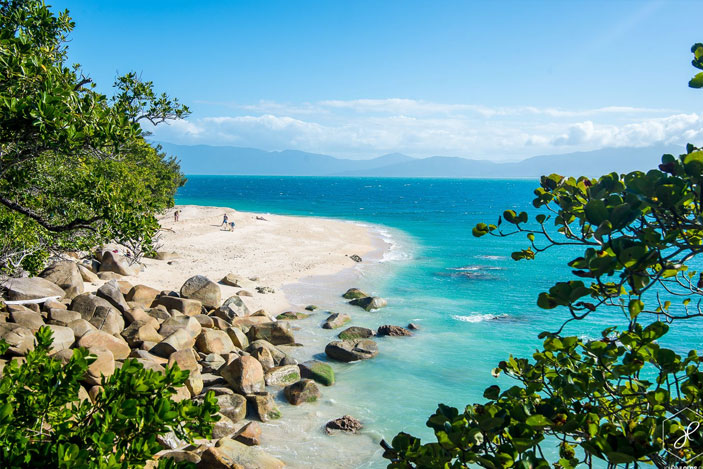 Ranked number 1 in Brad Farmers, Australia’s 101 Best Beaches awards of 2018, Nudey Beach is a spectacular white coral beach that has a long and colourful history.

Where Is Nudey Beach?

Is a small stretch of pristine white sand and coral beach that lays on the South-West shores of Fitzroy Island, a large tropical, continental island located 29 km south of Cairns in Far North Tropical Queensland. The island is nestled in amongst the Great Barrier Reef, surrounded by coral and rich colourful marine life and is covered in tropical rainforest, of which 95% is listed as a protected National Park.

How To Get There?

Starting out from Cairns you take a 45-minute ride on one of three Fitzroy Flyers that run daily. You arrive at Welcome Bay, which is directly in front of the eco-friendly, comfortable and affordable Fitzroy Island Resort.

From Welcome Bay, you can start your walk south along the Nudey Beach Walking Track which can be accessed from behind the bar near Foxy’s. In total it is only a leisurely 15-minute walk, which winds through tropical rainforest and coastal woodlands before eventually opening up onto the stunning, award-winning white coral beach.

You can really take your time on this walk to immerse yourself in the stunning natural beauty and take in some of the native wildlife which includes:

The walk is very easy, sneakers are recommended. Be sure to take a towel and wear swimmers so you can make the most of your time at the beach when you arrive.

Once on the beach, you are greeted by stunning views of the Cairns Hinterland and pristine, warm, blue tropical waters that lap gently on the shoreline in front of you. Behind you the beach is surrounded by large granite boulders that make you feel as if you’ve slipped into an ancient world were the hustle and bustle of the mainland is a million miles away.

Nudey Beach has a relaxed, friendly vibe. Often you’ll be sharing the beach with only a few other visitors. Nudey Beach is ideal for laying out a towel and soaking up some of the year round warm tropical weather.

You can even swim and snorkel amongst the colourful marine life that live in the shallow coral reefs that fringe the beach,  only a few metres out from the shore, making it the perfect place for children on learner swimmers to see the Great Barrier Reef from complete safety and comfort. The History Of Nudey Beach

Before Captain James Cook sailed the coast, between Nudey Beach and the mainland, on the Endeavour Ship way back in the late 18th century and gave Fitzroy Island the name we know it as today, it was previously known as Koba or Gabar by the local Aboriginal ‘Gunggandji’ people who use to visit the island on hunting and recreational trips. The Gunggandji (stands for ‘traditional lands’) territory was spread from Trinity Bay to Green Island and Fitzroy Island.

The original name (Koba or Gabar) meant ‘the fist’ and their dream-time stories tell of when the water level rose and Fitzroy became an isolated island. There is a cave painting of the Endeavour proving that the Gunggandji saw Cook as he sailed past

Afterwards the island was used for six weeks as a smallpox quarantine station for Chinese prospectors heading to the Palmer River Gold Field.  From 1905-1912 it was used as a penal colony for Yarrabah Mission, called Kobahra. Residents were sent to Kobahra as punishment for misbehaving. Some people were on the island for years, others were just exiled for a month.

During the war years it played an important role as the home of the No. 28 Radar Station. Some military personnel remained on island after the war to tend the lighthouse. The Lightkeepers moved to the island in 1947 and were a permanent fixture until the light closed in 1992. These days Nudey Beach is recognised as one of Australia’s premier beaches and is a must visit beach for anyone coming to Fitzroy Island.

Fitzroy Island is also now home to one of Australia’s best Island Resorts with over 100 rooms that have been carefully built to blend in with the stunning natural rainforest that covers the island.

The Resort has full amenities for hotel guests including the pool, however day-tripping tourists and locals looking for a quick tropical island experience can still explore the island freely.

Guest starting at Fitzroy Island Resort can enjoy the following:

Aside from the 99-room luxury resort, Fitzroy Island also has budget camping options making it one of the most affordable island destinations in Australia. Even with these facilities, it is not hard to get lost and find seclusion all by yourself of this large 3.33km square island.

If you are visiting Cairns, Fitzroy Island and more specifically Nudey Beach are two places you must certainly experience before you leave. And given the affordability and accessibility you really have no reason to not make the quick trip over for a day or even a little longer to really settle into the relaxed vibe of tropical island living.