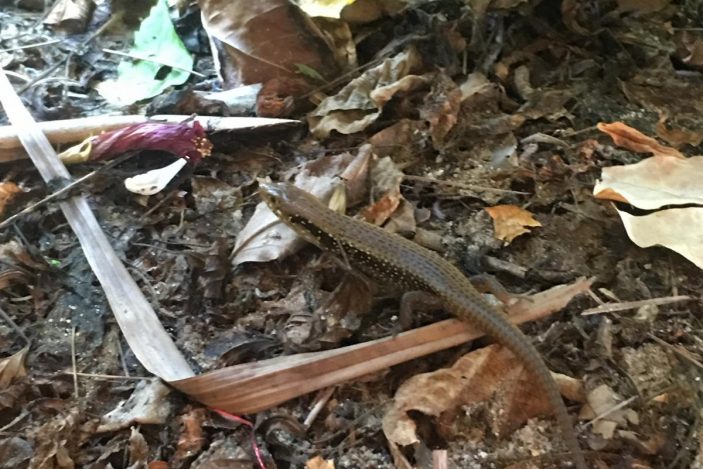 Goodness gracious me- I thought last month was hot! This January has been hot, hot, HOT! On the plus side it has been perfect for people to enjoy a snorkel over the coral reef. There are so many juvenile fish active at the moment- and of course their larger counterparts.

The Black Damselfish- a personal favourite of mine- have been wonderfully cranky and I have been challenged several times while snorkelling. Black Damselfish are infamous for their aggressive natures and short tempers. They have learned to swim aggressively toward an animal’s eyes when they want it to leave their territory and they treat everyone the same be it other species of fish, people or even turtles!

All come under attack when the Damselfish want their space. We have had several algal blooms this month which has whipped the fish into a frenzy. One afternoon I was watching an algal slick slowly drifting closer to shore. As it came closer I could see dozens of fish frantically zipping left, right and centre trying to eat as much as they could. Even the Black Damselfish were in on the action- making the first time I have seen them around the surface.

Not only were they on the surface but they were even leaping out of the water at regular intervals because they were so excited. I only wished that I had thought to bring a stinger suit with me so that I could have gotten in the water and watched from there.

We have had a few good bird sightings this month; especially with the Sunbirds and the Mistletoe Birds; both species are physically striking and with both you can tell the males and females apart owing to their different markings. A flock of Metallic Starlings have been attracting attention as they gorge on the Solitaire Palm fruits in the Resort garden.

These birds are a beautiful black- but in the right light they gleam with metallic green all over. They also have a starling blood red eye which captures people’s attention as they hop between branches gulping down the various fruits. And for the first time Peaceful Doves have been seen on Fitzroy Island!

These look like smaller versions of the Bar-Shouldered Doves but they are of course missing the characteristic rust-coloured streak that earns the Bar Shouldered Doves their name. I thought I was going crazy when I saw the first pair but then Tony, one of the Maintenance men and a bird enthusiast, found me and was extremely excited to report that he had seen three.

A week later and suddenly there were four! Unfortunately I have not been quick enough to snap a photo but if their presence proves to be for longer than a brief interlude then I should get a chance down the track. And on a slightly different subject a baby Yellow Spotted Sand Monitor has made its home around Zephyrs Restaurant!

Guests have been treated to regular sightings of its adorably small frame sunbaking on rocks and darting amongst the garden bed. On a quick glance once might be forgiven for thinking it was a tiny crocodile! It is the smallest goanna any of the staff have ever seen- usually we see them when they are already a year or two old.

This little fella is only a few months at best- and he is already having to fight to prove himself- the tip of his tail notably went missing between sightings. There have also been regular sightings of its much larger relatives roaming around. 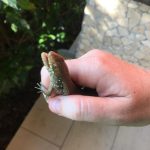 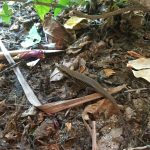 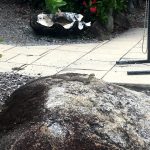 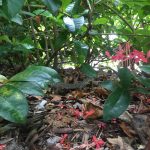 The first two images: Easily the smallest goanna I have ever seen. The two right images: a juvenile Major Skink that risked being stepped on in a walkway. He was not happy to be picked up but he was much safer in the garden! Photos by Jen Moloney

I think I would have to say though that January has belonged to the insects. We have been seeing Grasshopper nymphs, Katydids and native bees in abundance. One of my most amusing experiences was an afternoon I recently spent with a terribly confused Carpenter Bee.

Carpenter Bees are a large native Australian bee with all the grace and subtlety of a peg-legged pirate. I love them. Fortunately in Australia our native bees are stingless although it must be said that Carpenter Bees are not unique to Australia and are found in other countries. The name ‘Carpenter’ refers to the fact that nearly all of the 500 species construct their nests in wood/timber.

They like bright colours and have a penchant for investigating anyone wearing blue- coming nice and close so that you are completely aware of their large and noisy presence as they do so. On this particular day I happened to be enjoying a beautiful afternoon relaxing on the beach when this poor bee took a fancy to my bathing suit. It appeared to believe that the various splashes of colour in the pattern were actually a glorious bouquet of flowers.

For the next hour we got to know each other quite well as he kept returning to land and attempt to drink from the fabric. I actually got to watch him unfurl his glossa (their version of a tongue) and prod for food. The poor chap was terribly confused as to why he could not find his refreshing nectar reward! His regular visits only ended when I eventually gathered my things and retreated inside (from the sun, not the bee).

But the following day I had another interesting run in; this time with a male Rhinoceros Beetle who was flipped on his back and had obviously been that way for a while. I picked him up and put him outside – to which he naturally protested vigorously by rubbing his abdomen to his wing covers and making an angry hissing sound. Unfortunately for my poor beetle I happened to have chosen his recovery position poorly as I plopped him in the middle of what turned out to be some extremely angry Green Ants who naturally took his sudden appearance as an affront to their personal business.

They swarmed the poor fellow and I could hear his cranky hissing protests as they clamoured all over him- this was all within a second or so- the ants worked fast! I had to scoop the poor chap back up, dislodge the ants and transport him to a friendlier patch of garden. Frankly, you’d think he would be grateful that I interceded but apparently not!

He decided that he was thoroughly sick of the sight of me. I was a little worried as he just sat there stunned for a while so I kept returning to hover around the garden and check on his progress. Each time I reappeared I was greeted with a series of angry noises rising from the garden bed and warning me to stay away. He could spot me from a metre away. There’s just no pleasing some!

The coolest one insect of the month was a new discovery that turned out to be a Robber Fly. One day I noticed an interesting insect perched on some rope with what looked like a smaller insect- possible a small species of native bee- in its mouth. I snapped a few photos which appeared to irritate the insect as it flew aggressively at my face. As I ducked out of the way it re-landed on the rope and twitched its tail at me in agitation. I took a few more photos and was able to send them to the Queensland Museum- rapidly becoming my favourite website in the world- who identified the insect as a Robber Fly. This is where it gets interesting. 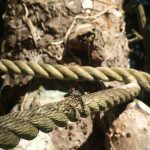 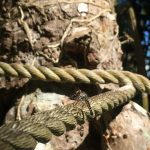 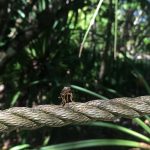 The Robber Fly sucking the juices of its prey. Photos by Jen Moloney

There are actually over 7000 species of Robber Fly and they are difficult to tell apart so I don’t know exactly what species this chap is- not that it will make any difference to its prey! The name Robber Fly (they are sometimes called Assassin Fly or Bee Killer) is derived from the aggressive manner in which they attack their prey – this fly is so fast it is actually able to grab hold of its prey midflight.

Their strong legs allow them to grab and hold their prey while they stab their short, triangular proboscis into its body and inject saliva that contains both neurotoxic and proteolytic enzymes. These work together to first paralyse the victim, then liquefy their innards. The fly then sucks the ‘organ soup’ back out via its proboscis. All in all you can safely say that it is a thoroughly charming experience for their prey.

Robber Flies actually feed on quite an array of species from beetles to butterflies and moths, bees, dragonflies and damselflies, wasps, grass hoppers and even spiders! Nothing is safe when they get hungry! This is an aggressive insect and they have been known to deliver incredibly painful bite if handled so it is best to observe them from a safe distance!

I was lucky enough to see a second one near the lighthouse not long afterwards. At first I took it for a small dragonfly but I noticed it was holding onto a smaller insect and after puzzling over why a dragonfly was carrying a small bee (for a bit longer than I’d cared to admit) it suddenly dawned on me that this was another Robber Fly clutching its prey and sucking on its juices as it threaded its way through a small bush.

It was impressive to watch it duck and weave between leaves, never losing grip of its meal.

It’s always a nice start to the year to begin with discovering a new animal. With such a promising beginning I can’t wait to see what 2016 has in store for us!