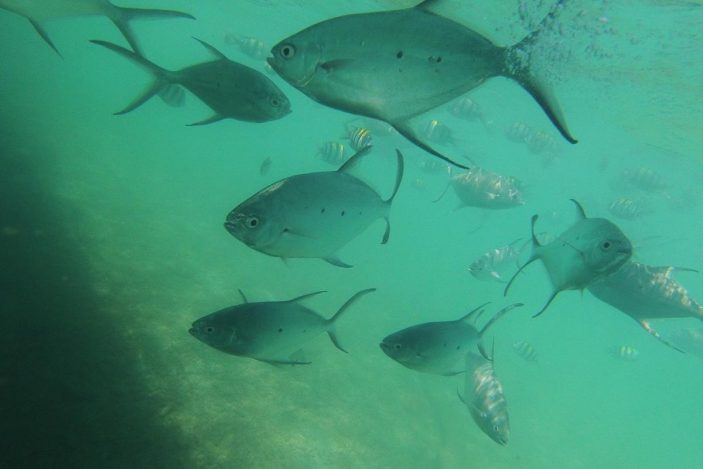 February has been all about the sea turtles- particularly the colourful characters being treated at the Turtle Rehabilitation Centre. Margaret the 90-year old Green Sea Turtle has been in particularly fine form- her pump has blocked a couple of times this month.

The first time was a thoroughly charming experience for me when I stuck my finger into her pump to dislodge the blockage only to discover that I was clutching a ten centimetre Centipede! Thank fully the pump decapitated it so it was as dead as a door knob when I grabbed hold of it – but that factor was only marginally comforting at the time.

I probably shouldn’t admit it but there was A LOT of shrieking following the discovery. A passerby might have been excused for thinking there was a banshee on the loose. Everyone has something that makes them melt down and for me its Centipedes and Crustaceans. If the two of them ever get together you know I’m in for a rough day.

But I digress. The point is, the next time that Margaret’s pump had a partial blockage I was somewhat less inclined to use my fingers to dislodge it. This meant that it took longer to clear and in that time Margaret became extremely put out. She kept swimming up to me to have a play but I could only give her a half-hearted scratch as I was trying to concentrate on the task at hand.

So after a few passes she decided to make her feelings known. She lined me up beautifully and made a powerful sweep through the water with her front flipper. The result was a spectacular tidal wave that arced over the top of the tank and covered me completely. There I was shocked, spluttering and soaked through.

Would you believe that the cheeky thing even dared to turn around and swim up to me with her head out of the water so that she could take a moment to admire her handiwork?!! You could be forgiven for thinking that on a hot summers’ day a good soaking would make a nice reprieve but I can assure you that when the water in question also has turtle poo in it, it is not such a pleasant experience.

So at the end of the day, Margaret got her point across and I got to sample a unique perfume. It’s definitely not a scent that will catch on though – it took a bit of convincing before my husband would let me into the house that night!

Unlike Margaret’s passive aggressive displays, Lou the Olive Ridley has become quite friendly toward me in the last month. He used to be quite stand-offish; eye balling me from a distance and swimming away if I came too close. Then one day for no discernable reason Lou suddenly decided that he liked me. Now when he sees me approach his tank he swims up (which is no mean feat considering Lou only has two flippers!) and gets himself really excited swimming back and forth, getting attention and scratches. Lou especially likes to be cleaned (we scrub their shells with brushes to remove algal growth). I probably should mention that we (the volunteers) all sign wavers when we start working with the turtles because they do like to bite; so when you read about us scratching them it is not something that I would recommend trying for yourself. If you ever meet Jennie Gilbert (one of the founders) while she is on the island just ask her to see her hand- she is always happy to show where her thumb was reattached. Lou has been guilty of attempting to bite (annihilate might be a better description) a few volunteers since he has been with us- but he is really coming to have a special place in my heart. Who doesn’t love an animal with attitude? Speaking of attitude, what can I tell you about Angie our female Olive Ridley? Angie is completely and utterly lovable; and also slightly insane (not literally but you will see what I mean). Angle has a large block of boulder coral in her tank that she loves to rub against. The trouble is that as she is rubbing on it she moves it across the tank and sooner or later it inevitably ends up in the Centre of the tank where it gets lodged in a small drainage divot. And then she spits the dummy. I have actually found Angie -more than once- charging around her tank in a bad mood because her boulder coral was in the wrong spot. As soon as it is moved back she becomes docile and calm again. Sometimes she’ll even swim up to it and cuddle it with her front flippers. It’s a little bit cute.

The Centre celebrated a turtle release this month when Jilly the Flatback Turtle finally got the green light for her release. Since she is a shy turtle the decision was made not to hold a public beach release but to quietly put Jilly on a Glass Bottom Boat and cruise around to release her from Sharkfin Bay. After quite a bit of debating about the best way to release a sea turtle from a Glass Bottom Boat the decision was made to lower her onto the ramp while a fourth person supported the weight of the metal ramp from in the water. It went off without a hitch- unless you count the fact that she appeared to make a beeline straight back to the Centre! Perhaps she wanted just one more look before she returned to her original home. 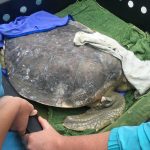 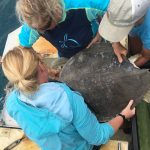 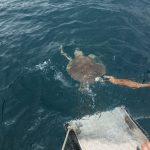 And she’s off! Here’s hoping Jilly never runs into another predator again! Photos by Audrey Straatsma

The snorkelling has truly been phenomenal this month with colourful fish, turtles and reef sharks abound. One memorable day owing to the sheer quantity of Blue Spotted Stingrays I came across- there was literally one every few feet! They were happily munching on whatever crustaceans they could uncover and paid absolutely no attention to the excited blue blob that kept free diving down in front of them to snap their picture. Unfortunately for me, in my enthusiasm I failed to notice that my Go Pro was not aimed correctly and as result when I got back most of my photos- instead of being nice close ups of their adorable little faces- were coral snaps with the hint of a stingray tail to one side. Not my finest moment.

Some highlights of the underwater world. Far Left: The one and only good photo of a Blue Spotted Stingray I have managed to capture for the entire month. Left: An example of the diversity of corals we have in Welcome Bay. Middle: Big Eye Treveally and Scissortail Sergeants gather for a feed. Right: Life on the reef is a giant battle- the white line that you can see fringing the purple coral is where it is being attacked by the smaller boulder coral (left and right). Far Right: You could say there are have been one or two jellyfish about! Fortunately this species has no sting. Photos by Jen Moloney 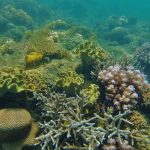 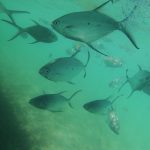 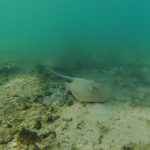 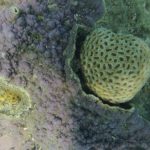 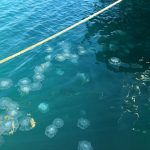 Toward the end of the month we had several injured birds brought into us. They were sent to mainland for treatment. We have yet to hear the news about two terns but we received some sad news about the beautiful little Azure Kingfisher found with a broken wing. Unfortunately the break was too severe to heal properly and the poor little mite was put to sleep. There were a few broken hearts at the Resort but at least we can take comfort that its end was quick and pain-free. Now we are all sitting tight and hoping that there is happier news from the other birds.

And with the end of February comes the end of summer- and hopefully some of this heat! The skinks and geckos have been particularly active; turning up in all sorts of odd spots (on the boats, in the bathrooms, hiding in the animal pamphlets, etc). On a funny note my Husband had an interesting skink experience one day while I was out snorkelling. He was relaxing on our deck when he suddenly felt a sharp bite on his toe. Leaping to attention he saw a small skink dart away 30cm, then turn and stare defiantly back at him; no doubt wondering what his problem was when it was the one being denied a tasty toe snack! But that’s Fitzroy Island for you- you never know what might happen next!