April was a mixed month in terms of weather with some gorgeous sunshine and some drizzly rain – but the animals were absolutely in their element and we had some truly special sightings around the island. April also marked the return of our favourite family of future marine biologists- a truly special family that visited the island last year.

During their last visit their gorgeous daughter was so enamoured with the work undertaken at the Turtle Rehabilitation Centre that she actually started making and selling her own turtle bookmarks to raise funding for the Centre.

This amazing girl single-handedly raised over $380 for the Cairns Turtle Rehabilitation Centre!!!!! She was able to present an extremely grateful Jennie Gilbert with the cheque this month. Words can never express just how truly grateful we are to you for your big heart Gracie- and how much we enjoyed having your entire incredibly enthusiastic family back on the island! Keep in touch.

In other turtle news it has actually been a big month at the Centre. We’ve had some pretty sad times such as when little Ruth, the post-hatchling Hawksbill turtle, passed away. Ruth had been transferred back into our intensive care unit in Cairns to investigate a persistent infection in her eyes but she passed away peacefully during her transfer. Her necropsy revealed that Ruth’s internal organs were malformed and she was never destined for a long life- in fact as she was on deaths door when she was initially brought to us the time that she spent in our care was an extra year of life. Many of the volunteers had a soft spot for Ruth as she was unobtrusive, small (which naturally means cute!) and partial to a gentle tickle. She never lost her vigour when it came to food and was one of the most enthusiastic feeders at the centre. In fact Ruth was responsible for instituting feeding tongs (or in her case, feeding tweezers) at the Centre after more than one volunteer was caught nursing bitten fingers. She may have had a small mouth but she sure knew how to use it! Despite the sadness at having lost one of our turtles, we can at least be happy that she had a good last 14 months being tenderly cared for. Ella is still in our care; we are hoping for a release within the next few weeks so fingers, toes and flippers crossed that the next nature wrap finally has a happy ending for her!

We have had a truly amazing month for wildlife-a pod of Pilot Whales have been spotted on three separate occasions swimming around the island. Some lucky visitors have been spotting the various reef sharks going about their business- from our Tawny Nurse Shark to a Grey Reef Shark through to both the Black Tip and White Tip Reef Sharks; it’s basically been a great month for sharks! They are a truly special creature and so graceful in the water. It’s a different story with the schools of juvenile Giant Trevallys that have been cruising around lately. They are too small to worry the fish during the fish feeding but they absolutely smash the smaller bait fish. One day we had to halt a fish feed because we couldn’t actually see the fish anymore from all the thrashing and frothing after the juvenile school came rushing through on the hunt. As soon as the water cleared, there was all our fish, completely unfazed by the commotion and calmly waiting for the next handful of pellets. It is a very different story when the adults are around!! The Egrets of course love when the Trevally school starts hunting because they race into catch the tiny fish as they leapt to escape the jaws below-only to land in the beak above! We have also been getting regular sightings of the White Bellied Sea Eagles hunting through Welcome Bay with their striking colour patterns and impressive wingspan.

Speaking of bird news the one and only right handed cockatoo on this island turned up again this month- and it was perfect timing just as I was telling some guests that only one bird uses his right claw and wallah! There he was. You have to love it when that happens! Tony, one of our Maintenance men and a true bird lover, found a stunned juvenile Orange Footed Scrub Hen and spent fifteen minutes warming it in the sun, cuddling with it on the beach (as in the bird literally climbed up his side and nestled itself against his body) and generally striking a friendship before the bird was sufficiently recovered to release back into the bush. The butterflies have been out in abundance- too many to count but the Green Triangle, Blue Triangle, Ulysses, Cairns Birdwing and Common Eggflys have all made appearances this month. It’s been very beautiful- you just have to take a moment to look up. 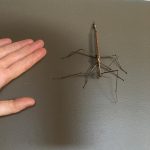 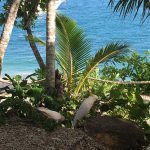 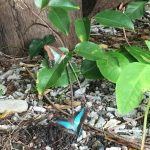 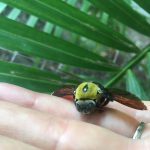 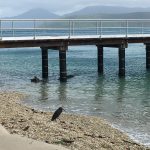 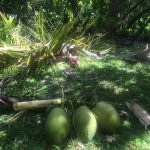 Photos Top Row (left to right): The Sulpher Crested Cockatoos are sighted daily foraging the various fruits across the island. Stick Insects have become progressively more active this month. These beautiful Blue Triangle Butterflies were the only butterflies I managed to catch on camera this month. Bottom Row (left to right): The Australian Carpenter Bee is a large, stingless insect that a quite dominant pollinator across the island. Everyone’s favourite Eastern Reef Egret is at it again, waiting for the insuspecting bait fish to venture too near his sharp beak. Fitzroy Island Coconut Palms find themselves a little naked this month after their fruits and older leaves were stripped. Photos by Jen Moloney

After a bit of rain overnight our Anzac Day Dawn Service went off without a hitch- except for the way that the wildlife has a slight tendency to steal the show. Six Giant Trevallys’ spent the morning hunting themselves into a frenzy all around the jetty, leaping and splashing and having a grand old time during the speeches. A lone juvenile Lemon Shark cut its way lazily through the water, completely ignoring the chaos being caused by the Trevallys and a gorgeous Eagle Ray caught the eye just as everyone was departing the jetty at the end of the service. There wasn’t much of a sunrise thanks to heavy cloud cover but the ceremony was perfect and a touching tribute to the men and women that have sacrificed so much of themselves for us to enjoy the freedoms we have today.