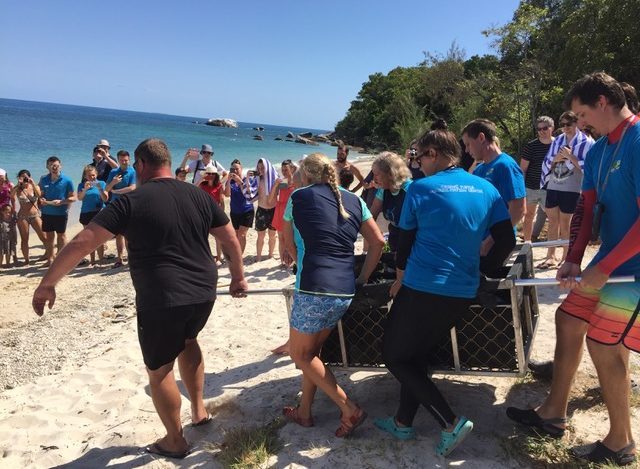 A large breeding green sea turtle named Margaret will be released at Fitzroy Island tomorrow following her remarkable rescue there three years ago and her recovery at the island’s Turtle Rehabilitation Centre.

Suffering pneumonia and impaction from marine debris, Margaret was rescued by a Cairns Dive Centre crew who saw her floating near Fitzroy Island. Presumed to have been floating for many months the severely malnourished turtle was so large that eight people were needed to lift her on to the boat.

More than 80 years old and 1.1 metres in length, Margaret is one of the oldest female breeding turtles ever rescued. She has a state-of-the-art satellite tracker attached to her so researchers can follow her journey.

The turtle’s namesake, the late Margaret Deas, was one of Australia’s oldest conservationists who celebrated her birthday in 2015 by completing 102 squats – one for every year of her life – to raise funds for the Australian Wildlife Society. The $5000 she raised was donated to the Society’s marine turtle project at the Cairns Turtle Rehabilitation Centre, allowing Margaret the turtle to eat fine-dining seafood.

Fitzroy Island Resort Chief Executive Officer Glen Macdonald said Margaret’s birthday feat was quite extraordinary, not only for her age, but given that during her life she experienced a heart attack, two broken hips, a broken leg, a broken pelvis and a broken ankle.

“Margaret was evidence of the power of exercise, rehabilitation and determination. It is therefore fitting that a mature, determined sea turtle that benefitted from intensive rehabilitation should be named in her honour,” he said.

Marine turtles are categorised from Threatened to Critically Endangered. Only one in 1000 turtles reach the age of 30, which is when green sea turtles start to reproduce.

Sponsored by Fitzroy Island Resort, the Cairns Turtle Rehabilitation Centre is a volunteer operated, non-profit organisation dedicated to the rehabilitation of sick and injured turtles with 14 turtles currently in care. Tours run daily from 1pm, with a maximum of 15 guests. Bookings can be made only on the day at Fitzroy Island Resort’s general store. Cost $8.80 adult, $5.50 child (4-13 years).

Turtles can also be seen in the wild at Fitzroy Island with snorkellers likely to see green sea turtles and the occasional hawksbill turtle in Welcome Bay and at Nudey Beach.

Find out more about the tours and Fitzroy Island here.

To organise media interviews contact Liz Inglis on 0419 643 494 or liz@lizinglismedia.com