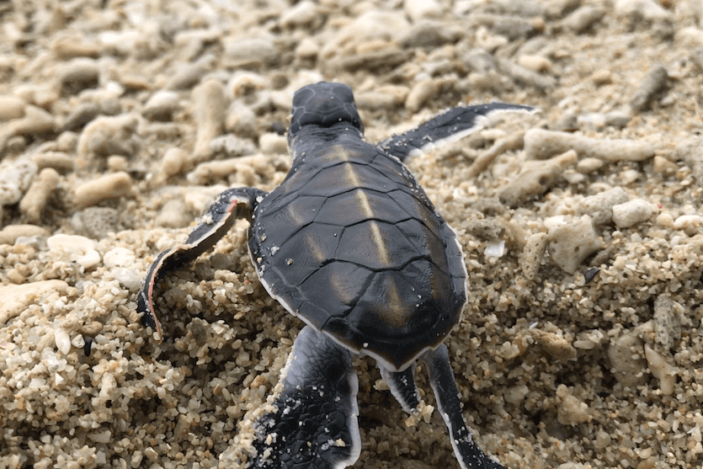 More than 700 tiny green sea turtles have hatched on Fitzroy Island and swum to freedom on the Great Barrier Reef in Tropical North Queensland.

Fitzroy Island Resort marine biologists Jen Moloney and Azri Saparwan witnessed hatchlings about 6cm long burst from the sand and scurry into the Coral Sea in a matter of minutes.

“I was lying on the beach watching the moon and the fire flies and turned around just in time to see a tiny hatchling followed by an eruption of baby turtles burrowing through the sand,” Jen said.

“The hatchlings were in a flurry of excitement and racing for the water, as all they are wired to do for the first three days of their life is to swim away as fast as they can in the currents.”

Jen and Azri have been monitoring seven turtle nests on the island which were laid over a three-month period by a green turtle called Yasi who is believed to be up to 70 years old.

Yasi the green sea turtle builds one of seven nests which have hatched on Fitzroy Island over the past two months.

“Cairns Turtle Rehabilitation Centre volunteers christened the turtle Yasi in 2011 when seven of her nine nests on Fitzroy Island were destroyed during Cyclone Yasi,” Jen said.

“Yasi did not return until November last year when she laid the first nest and came back every one to two weeks to lay another, with the last nest laid on January 29.

“Although it has been seven years since Yasi last nested on Fitzroy Island, she has done well as most green sea turtles lay one to seven nests every two to six years.

“Because Yasi was the only turtle nesting on Fitzroy Island, predators such as goannas and birds did not come looking for the eggs and hatchlings giving these youngsters a good start in life.

“Only one in 1000 turtles reach the age of 30, which is when green sea turtles start to reproduce, and around this age Yasi’s daughters will be guided back to Fitzroy Island by their internal GPS to lay their eggs where they were born. “The young turtles face a number of threats at sea including plastic ingestion and boat injuries.

“We see evidence of it at the Cairns Turtle Rehabilitation Centre on Fitzroy Island where volunteers feed and care for injured turtles.”

Tours operate daily at the Turtle Rehabilitation Centre so visitors to the island can meet Jet, an eight-year-old green sea turtle rescued off Fitzroy Island in July 2017, and learn about the threats to turtles on the Great Barrier Reef.

Turtles can also be seen in the wild at Fitzroy Island with snorkellers likely to see green sea turtles and the occasional hawksbill turtle in Welcome Bay and at Nudey Beach.

The Cairns Turtle Rehabilitation Centre on Fitzroy Island is a volunteer operated, non-profit organisation dedicated to the rehabilitation of sick and injured turtles.

The Turtle Rehabilitation Centre tours run daily from 1pm, with a maximum of 15 guests. Bookings can be made only on the day at the island’s general store. Cost $8.80 adult, $5.50 child (4-13 years).

Find out more about the tours and Fitzroy Island at www.fitzroyisland.com Download images of Yasi laying the eggs and video of a baby turtle hatching from: https://www.dropbox.com/sh/kp5h17oyh69zs6f/AAD3eGDsSzRWqzz7PO-1-9uIa?dl=0

To organise media interviews contact Liz Inglis on 0419 643 494 or liz@lizinglismedia.com