September has been truly spectacular. The weather has been perfect- blue skies, slight breeze and fantastic water visibility for snorkelling and diving. We have had a little rain overnight; just enough to ensure that the proposed island burn was abandoned until next year. the Queensland Park Rangers came out with all their gear ready to go, only for it to rain again that night (as it had a few nights this month). They went and checked just in case but came to the conclusion that the island is just too green to successfully burn this year. So we get to keep our lush green hills for another 12 months!

Migaloo, the glorious white whale, was spotted travelling south between Green Island and Cairns- he swam right past us along the Grafton Passage and is now on his way back to Antarctica. The Manta Rays have been unbelievable this month- schools of them have been spotted in various locations from Shark Fin Bay to White Rock and Nudey Beach- a few lucky people have been able to swim with them! The Turtles have naturally been in abundance- and one turtle is rapidly developing a name for himself as he always appears with a lone Trumpetfish hanging over his carapace. Many turtles have Remora fish hanging off them but this is the only one with a Trumpetfish! They have been sighted regularly over the last month, always together. No photos yet- naturally each time I manage to spot the pair it is on days that I didn’t bring my camera. And while we are on the topic of photographs- one lucky guest was able to capture a few brilliant snaps of two Green Sea Turtles mating. I wonder if that is a sign that our one and only turtle to lay on the island may actually be coming back to nest this year! We have a new arrival to the Rehabiltation Centre on the island- a young Green Sea Turtle called Woodson. Woodson was discovered floating and starved and he has suffered significant trauma to his head- part of his skull has collapsed. Despite this he is a really happy turtle- although so far he has tried to bite me more than almost any other turtle. Everything is food in his eyes and apparently my fingers look particularly tasty. And there has been a bit of that going around- even Margaret has tried to bite me a few times this month. On one particularly memorable occasion she decided that she didn’t like my face so close (I was leaning over trying to clean her shell) so she tried to bite it off for me. Very generous of her but I had to decline her kind offer by throwing myself backwards away from the tank. On another occasion I was trying to update her profile photo (check out the link ‘Meet the Patients…’ on this website) so that you could actually see her face. But apparently she was having a bad hair day as she kept swimming up and lunging for the camera. It was only after I reviewed the photos that I realised just how close she had come to getting me! 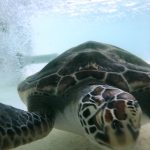 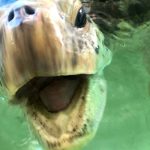 Photos: (Left) Woodson was extremely shy about having his profile picture taken unlike Margaret (following three photographs) who regarded it a personal challenge whether or not she could bite me. Photos by Jen Moloney

One day not so long ago I was walking back from the Turtle Centre when I registered a blue Kingfisher whizzing past. I heard a distinct ‘plop’ which I at first took to mean that it had ever-so-charmingly emptied its bowels right in the middle of the path; but as I took another step forward it suddenly occurred to me that it may have dropped something. Retreading my steps a little cautiously (in case it was a snake) I saw what I first thought was the dropped tail of a skink. As I strode closer to get a good look at it, it suddenly bolted. It turned out to be the smallest, skinniest skink I have ever seen! (No wonder the Kingfisher couldn’t keep a grip on it!) This beautiful Fire Tailed Litter Skink Lygisaurus parrhasius (formally Carlia parrhasius) has become an increasing common sight scuttling along the paths around the hotel garden. They are incredibly beautiful-the photos really don’t do justice to the incredible colour of their heads and tails. They really look like tiny red hot pokers rushing through the undergrowth. As you can imagine this poor little chap wasn’t too keen on having his picture taken (having just escaped certain death) but I managed to snap a couple before he made a dash for shelter (under a tiny little leaf- this guy was SMALL). It occurred to me that the Kingfisher may not have gotten so far once he realised that he had lost his quarry. And sure enough, right there on a branch along the beach track a short distance away- one very sulky Kingfisher sat skulking. Now, the Fire Tailed Litter Skink was none too pleased at having his picture taken but his reaction was nothing in comparison to this Kingfisher. To him, my apparently delight at his situation- having just lost what was an undoubtedly highly anticipated feed- and determination to capture the moment was just one insult too many. He glared at me and took flight. We played a brief game of cat-and-mouse up the beach as he doomed further into the bushes and I huffed my way determinedly behind; popping up at intervals and trying to get another shot. I managed to get one not-so-great photo (he wouldn’t let me near him) before he finally shot off so fast that I didn’t see where he landed and he finally managed to shake me. Now I can’t really be sure but I’m reasonably confident that he rolled his eyes just before he did so. Looking through the bird book afterwards I suspect he is a juvenile Sacred Kingfisher judging from the ever-so-slight buff colouration on his belly and the blue-green of his back. 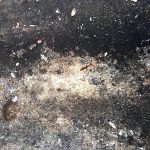 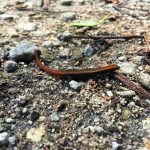 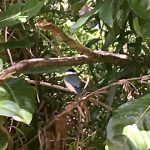 Photos: (Left) This has to be one of the luckiest skinks in the world. (Middle) Seriously look at how small he was! If it wasn’t for his aptly-named fiery tail you wouldn’t even pick him out. (Right) This Kingfisher believes I have the most abomniable manners in the world to take his photo as such a time. And perhaps he’s right. Photos by Jen Moloney

In contrast to the sulky birds, I think we have some of the most polite wasps ever on this island. The other day I was moving the Dive Centre’s A-Frame sign around when I became aware of a black and yellow wasp hovering anxiously around me. Curious I dropped the frame into position and waited for what I suspected the wasp would do. And sure enough its relief was palpable as it dove straight past me to exactly where my hands had been holding the frame. Lo and behold once I peered inside I could see him frantically poring over his little nest. I have seen this sort of behaviour before. I remember years ago when Paul (from the Turtle Centre) and I were using a ladder at the Centre a little red wasp was performing the same hovering, anxious little dance. As soon as Paul moved away it instantly dove for its nest that was on the inside of the ladder. After its long wait, the red wasp was in and out in 30 seconds but it seemed quite happy and I remembered thinking how dreadfully polite it was. My childhood memories are of wasps being nasty little things that attack and sting repeatedly at the slightest provocation. But even though my yellow and black wasp (I believe it is a Paper Wasp) has a bad reputation for being aggressive when it feels its nest is threatened; this guy was just really sweet. I’ve been keeping an eye out for him most days. I’ve named him Anthony. Even though the fact that he built a nest actually means that he’s a girl. Perhaps I should call him Antonia instead. After a few days I discovered what I am taking to be an egg sticking out of one of the ‘honeycomb’ holes. So here’s a really cool thing about wasp eggs. Females are able to store sperm inside their body separate from the egg. This means that she can chose to lay the egg without fertilising it if she wants to – an unfertilised egg will hatch a male wasp. But if she wishes to produce another female wasp then she needs to dip into her sperm storage container and release a few strong swimmers. This incredible ability means that in most wasp species (under normal conditions) the female is able to decide the sex of her offspring. Now that is pretty cool. 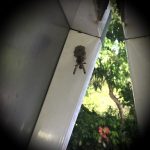 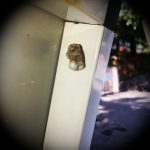 Anthony tends to his nest (yes I know he’s a girl but I like the name so I’m sticking with it!) Photos by Jen Moloney

And I couldn’t sign off this month without relating an amusing little antidote concerning the antics of the Front Office girls late one night. It would appear that a rather friendly Python decided he wanted an exclusive behind-the-scenes-tour of the back office. While two of the Front Office girls cowered in fright, a third (Kristina- a girl after my own heart when it comes to snakes) swooped down and started cooing over it lovingly as she sat and patted it for a bit. After a few protests from those still inside the building, she reluctantly walked it away and released it in the nearby scrub, then went home fo rthe night. However it would appear that the snake had rather enjoyed itself and it came straight back to knock on the office door again. Perhaps it meant to ask if Kristina could come out to play. Unfortunately for the little chap, with Kristina home in bed the only answer was a resounding shriek followed shortly by the sound of towels being rolled up and rammed under each door so that he couldn’t poke his head inside.

Confused by this apparent change in attitude from his new-found-friends, the little snake sat and puzzled over it for nearly an hour. Which means that for nearly an hour the girls were barricaded inside, grateful that they at least had some food between them so that they wouldn’t starve to death while under siege from the snake sitting stubbornly on their doorstep. The standoff was only broken when our Security Guard Andrew came along and firmly told the snake that it was time to move on. Apparently the Python wasn’t as keen on Andrew as it was on Kristina because it didn’t come back again.

So that was September! Let’s wait to see what October has in store for us!