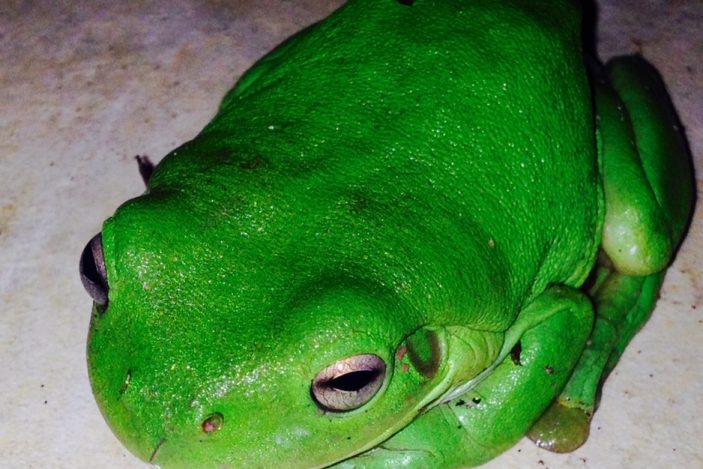 This month has been one of sporadic interesting sightings. We’ve had a beautiful White Bellied Sea Eagle fishing off the jetty, the Terns of course have been having a blast with all the bait fish- I saw one bird plunge into 30cm of water to make a catch. No wonder we’ve had a few Terns taken over to the mainland for medical treatment if that is what they are doing! Two of the birds that went over last month were returned and released back on the island. Barry the Barracuda is back under the jetty at night- this makes me very happy as we thought we had lost him after he disappeared for a few months. The hoards of baitfish have also brought in some of the utterly adorable Black Tip Reef Sharks. The other day I was exploring along Nudey Beach in time to see a few driving the fish into the shallows in a bid to grab themselves some breakfast. 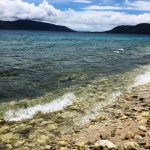 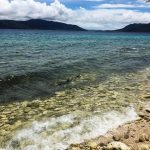 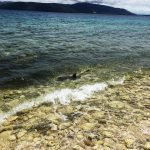 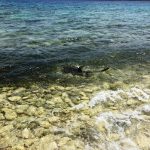 Black Tip Reef Sharks are truly one of the most stunning of all the shark species; though they tend to be a little skittish. Photos by Jen Moloney

We had quite a bit of rain early in this month which proved to be fatal for one Blue Spotted Stingray. Our tidal creek spent almost two full weeks open to the sea owing to the influx of rain each night and when it eventually closed a little Stingray was trapped inside. As you may recollect, this is not a new phenomenon as one stingray lived inside the creek for a couple of months last year without incident but unfortunately the sheer quantity of rain proved too much for this girl as it meant the creek was mostly fresh water rather than salt. At least I was able to retrieve her body after she was spotted (no pun intended).

Our toe-munching skink from last month has completely taken over our verandah. It’s his territory now! From his first bite this little chap has developed quite the fetish. I managed to keep him at bay one afternoon with bribes of passionfruit- have you ever seen a skink eating passionfruit? It was a pleasant surprise- and quite funny to watch his little grey tongue darting out of his mouth every other second while he chewed on the fruity pulp. But even this peace offering only bought me a day of goodwill before he was back to stalking my feet. It is quite a strange sensation to have a skink litterally snapping at your heels! Without a doubt the coolest creature of this month was a golden Jumping Spider called Cosmophasis bitaeniata or Green Tree Ant Cosmophasis. This little chap is found throughout New Guinea, Australia and Micronesia and they are extremely cool. This spider cloaks itself in the scent of a specific Green Ant colony then moves freely amongst the workers eating their larvae. They have to avoid the guards as their chemical mimicry trick does not fool them but provided they don’t run into the guards they can move round the nest at will and literally pull the larvae out of the small worker ants’ jaws without a worry. Unfortunately their clever trick can be their undoing if they run into a rival ant colony. The second colony will also recognise their scent as an enemy ant and so will attack it without realising that it is actually a spider. I wonder if that is how this one lost so many legs. At any rate it is a really beautiful spider so I now know to pay close attention to Green Ant colonies in case there is another of these golden beauties lurking nearby. 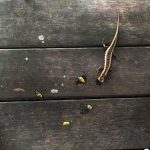 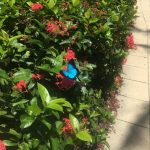 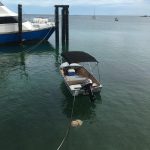 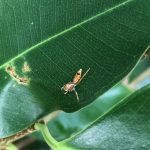 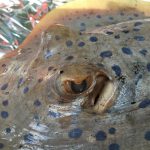 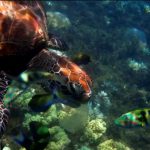 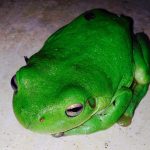 We had some sad news about Ella the Green Sea Turtle this month. Ella has been in the final stage of release from the Turtle Rehabilitation Centre since the start of the year. It was looking increasingly likely that she would be released at the end of this month but just as that date was in view there was an unfortunate incident that has postponed her release indefinitely – a toddler threw a stone into her tank and she ate it. We have had a team of vets look at her and all the volunteers are all now watching over her like mother hens (ready to detect any change in her attitude or appetite). Everyone is crossing their fingers, toes and flippers that she passes the stone without incident but until that occurs we can only wait with baited breath and hope that she is okay. This of course means that until we are sure that the stone is out of her system and not causing any obstruction in her intestines, she is not going anywhere. Here’s to hoping that next month she is right back on track for her release.