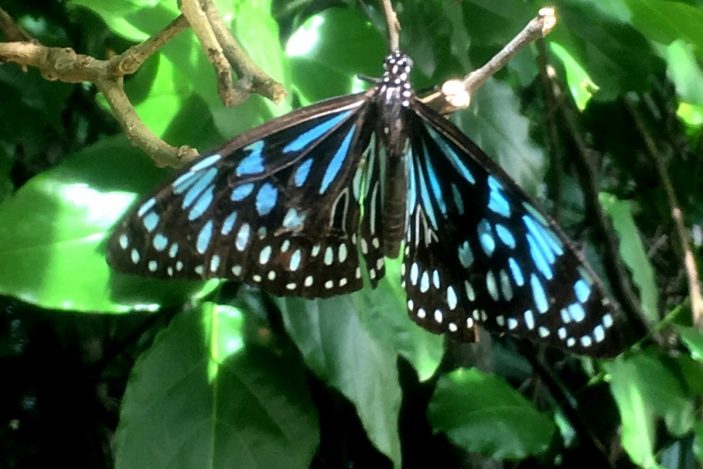 Well sure enough as I continued speaking a little black and white bomb came hurtling down and landed with a moist splash on the ground not ten centimetres to my right.  Looking up I saw that the Cockatoo was moving around the branches and peering down at us- no doubt looking to see if his little donation had struck home or aiming to share more good luck!.

They say that it is lucky to have a bird poo on you.

Well it seems I did get lucky.  First of all- I saw the Freshwater Turtle that had been living near the staff quarters.  This makes me the eighth person to have spotted the shy reptile- although it was only for half a second.  The turtle was resting on a partially-submerged log with the front part of its body hauled out of the water.

As soon as it saw me it slipped quietly beneath the surface and buried itself under the leafy debris that is currently littering the bottom of the waterway.  I am feeling pretty happy about this sighting- although truthfully what I would really love would be to get a photo of the turtle so that we may be able to identify the species.

But speaking of photos- Danni, one of our bubbly Food and Beverage Attendants- was able to snap a great photo of our gorgeous Short Nosed Echidna!  I suspect that it may be the same Echidna that was discovered in the construction site because it has been popping up every few days moving ever so slowly east across the island.  More and more staff have been fortunate enough to see it.

I really hope that my turn to see it is coming soon! 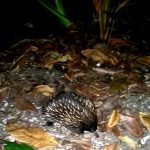 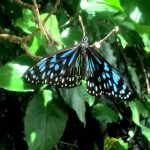 Other amazing sightings made by a staff member includes a truly incredible sighting of two Manta Rays mating (or so we believe from the footage)- and in the video you can clearly see that two Manta Rays were being followed at a short distance by what was suspected to be two other would-be-suitors.

Kristina, our former Front Office Manager, was enjoying one of her last days on the island and decided to join the Glass Bottom Boat tour for what turned out to be the best tour of the year!  She got some truly amazing footage of the Manta Rays twisting around each other as they pirouetted through the water column.

Unfortunately I am not able to upload video footage so you’ll have to take my word for it that it was sensational.  And perhaps the biggest surprise was that it was filmed at Nudey Beach.  Every other Manta Ray sighting has been around the White Rock region (the other side of Welcome Bay).

We have of course had regular sightings of whales around the island, including inside Welcome Bay itself.  I’ve managed to miss nearly all of them so no photos- sorry!

Rinney the Green Sea Turtle has stepped up his unusual behaviour this month.  I’m not sure that I could call him a diva as such because it is not so much that he throws tantrums for the sake of it (although Margaret has definitely earned herself diva status) but I think that Rinney’s behaviour is more like that of Sheldon Cooper.

He’s set in his ways of how he likes things to be done and it takes time and gentle persuasion to get him open to new experiences.  For example, if Rinney wants to play it still has to be from one of two specific locations around his tank.

If I am standing too far away from either of those locations- forget it!  At the start of the month he had significant algal build-up over his carapace so I started devoting time each afternoon to giving him a scrub.  Now Rinney LOVES a scrub – but to begin with he was a little bit frightened of the brush itself.

In order to give him a scrub I would have to make sure that he couldn’t see it dip into the water behind him- and I’d have to be ready to pull it straight back out if he turned too sharply and caught sight of it in my hand.

To call Rinney ‘finicky’ might be an understatement.  Fortunately over time I was able to slowly get him used to seeing the brush underwater until he was at the point that he would happily swim up specifically to get a scrub.  So imagine my surprise when one day I grabbed a brush and went down to his tank only to be given a very wide berth.

I could not understand it.  And then suddenly it dawned on me.  I was using a different brush.

Though they looked similar the new brush was slightly ‘S’ shaped while the old one was rectangular.   I raced off to fetch the original brush and the difference was automatic.  Rinney instantly dove in for a scrub (now that I had ‘the right brush’).  As an experiment I switched between brushes and it was like playing with magnets- one brush repelled Rinney while the other brought him closer.

So now I have to keep tabs on the brushes so that I only use the Rinney-approved brush in future.  Mind you, with all this scrubbing I have to say that his carapace is starting to look quite good!  You can actually see his natural marking again as most of the algae has been removed.

But that’s not all on the Rinney front.  He’s developed an unusual aversion to blue; particularly bright blue.  Now this is odd because his tank is blue and the volunteers wear blue and I don’t think that he shows any issue with it in the mornings.

But I have noticed during tours that he won’t go near people wearing bright blue- he will keep changing directions as he approaches their location rather than swim past them.  I’ve also noticed that he won’t approach a blue camera either.

But then, some days he surprises me by having no reaction to blue at all.  You just never know what you will get with Rinney from one day to the next.   Unfortunately one trend that I have become aware of is that if someone accidently gives him a fright during a tour he remembers that I was there and can be stand-offish for the rest of that day.

It’s almost like he holds me personally responsible simply for being in the area at the time that he was scared.  All in all, he’s quite a funny little chap but he is rather endearing and more than a little bit adorable which more than makes up for his quirky habits.