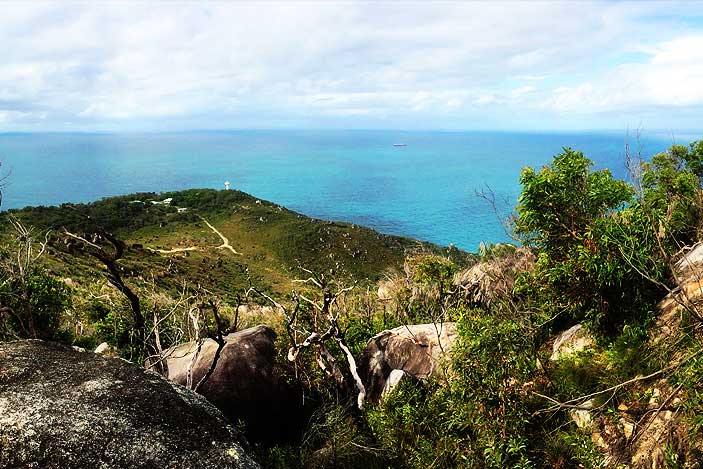 Fitzroy Island is a breathtaking tropical Island in Far North Queensland and only a  short 45 minute Fast Cat ride from Cairns.

Today, Fitzroy Island is a popular holiday destination for both tourists and locals who come to soak up the laid back tropical vibe of this Island paradise. It is covered in lush tropical rainforest with pristine sandy beaches and surrounded by magical coral reef and amazing marine life.

However, Fitzroy Island wasn’t always just a hotspot for holidaymakers. It has had a diverse  and colourful history including operating as a Chinese quarantine station during the goldrush, being a mission for the local aboriginal people and as a coast watch station during World War 2.

Throughout its time, Fitzroy Island has also been important as a significant lighthouse base. Before there was any kind of lighthouse on Fitzroy Island, several ships had been wrecked on the surrounding reef. So, in 1923 the first navigation light, a carbide gaslight was put in place on Little Fitzroy Island to warn ships in the Grafton Passage about the reefs around the Island.

Little Fitzroy Island is a small, but tall Island just off to the side of the main island, which you can still access today by taking part in a guided sea kayak tour when visiting Fitzroy Island.

In 1943 a lighthouse was built on the main Island on the ridge above the old lightkeepers residence, providing an important navigational service for wartime shipping and to supplement the light on Little Fitzroy Island.

During this time all unmanned lights in the Great Barrier Reef had been turned off to thwart Japanese raiders and the manned ones such as the one built here in 1943 were only turned on for identified ships as they passed by.

This lighthouse was unique, not just in Australia but perhaps the world, in that the light characteristic seen was dependant on the direction, corresponding to different morse code signals.Two synchronised, rotating bullseye lens panels were used to achieve this result.

The lighthouse on Fitzroy Island that can be seen today was built in 1973 and its light source was an array of sealed beam lamps. It stands on what was once the site of the No. 28 Radar Station, which was established in 1942 due to the constant threat of attack from the Imperial Japanese Navy. Once this lighthouse was built, the light on Little Fitzroy Island was deactivated.

This new lighthouse was not as strong as the old one and several attempts were made over the years to strengthen it, including installing solar panels. In 1992 the decision was made to shut down the lighthouse on Fitzroy Island and it is now used by the Fitzroy Island National Park as a visitors centre. After the closure of the lighthouse a new, smaller automated light was built on Little Fitzroy Island which is still in use today.

After the military base was shut down the buildings were divided up between the Yarrabah Aboriginal Mission and the Commonwealth Government. Those sold to the Mission were taken down and removed and the remaining Government buildings were used as homes for the lightkeepers.

There were a total of 90 lightkeepers and their families who lived on the Island during the 49 years that the lighthouse was active and the responsibilities of a lightkeeper on Fitzroy Island could be quite complicated and challenging.

M.V. Rooke was the head lightkeeper in 1950 and his time on the Island was plagued with problems, including visitors hunting the wildlife, dumping rubbish, destroying trees and even erecting illegal holiday homes. There was also an outbreak of bushfires started by exploding WW2 mines during his stint as head lightkeeper.

In 1960 new weatherboard homes were built for the lightkeepers and their families to replace the old military buildings, and as time went by the position of lightkeeper on Fitzroy Island became a lot easier and a much more pleasant experience.

Although the lighthouse tower is closed to the public you can take a walk up to the site to see the lighthouse and some of the old cottages, you can even check out the unique 1942 light which is on display in the lighthouse office.

The Lighthouse Walk is a 3.6km return trip up a steep concrete road that starts at the north eastern point at Welcome Bay. There are many great viewing platforms along the way and the breathtaking views from the top will be well worth the walk.

When the ranger is on duty you can enjoy 360 degree views of Fitzroy Island and the stunning Coral Sea. In winter you may even be lucky enough to spot a migrating humpback whale.

Fitzroy Island is not only a magical place to soak up the sun and explore the reef, it has an interesting and dynamic past that makes it unique. When visiting Fitzroy Island make sure you take some time out to explore the Island and learn more about the history of this special place, it will definitely enrich your visit.