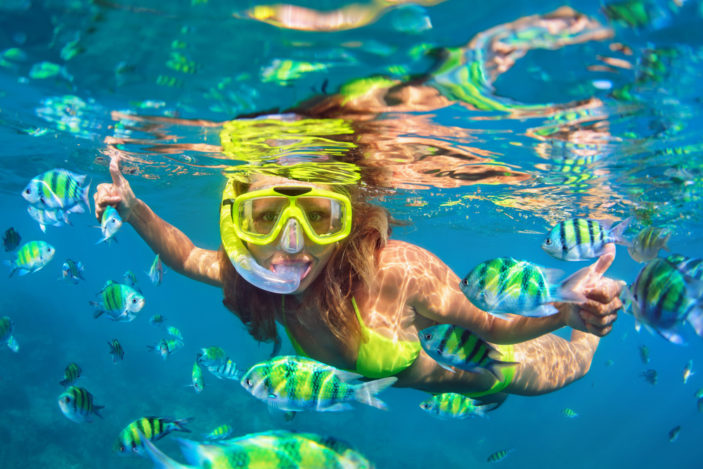 Snorkelling is a fun, relaxing and budget-friendly means for exploring Australia’s Eastern coastline, whether it be amongst stunning coral formations (such as the Great Barrier Reef), sunken shipwrecks (like Tangalooma Wrecks, off the coast of Brisbane) or freshwater river systems (such as Mossman River, located north of Cairns).

Snorkelling is the perfect option if you are looking for a cheap and easy way to explore underwater environments, particularly when compared to scuba diving- not only does scuba diving require a dive certificate, but also the use of heavy, technical equipment. Gliding through one of Australia’s many underwater paradises by means of snorkelling simply requires a snorkel, mask and fins… and a sense of adventure, of course!

Thanks to its incredibly large coastline, Australia is home to more than 10,000 beaches as well as numerous river systems, making it one of the greatest countries in the world for amazing snorkelling. Queensland, the most northern state on Australia’s east coast, is home to some of the best snorkelling locations found anywhere in the country, largely thanks to it being home to the infamous Great Barrier Reef.

However, Queensland is not the only eastern Australian state with incredible snorkelling locations; Victoria and New South Wales are also home to a variety of beautiful underwater environments, such as Flinders on the Victorian coastline and exquisite Jervis Bay in New South Wales.

Let’s take a look together now at our top eight picks for outstanding snorkelling on the east coast of Australia. 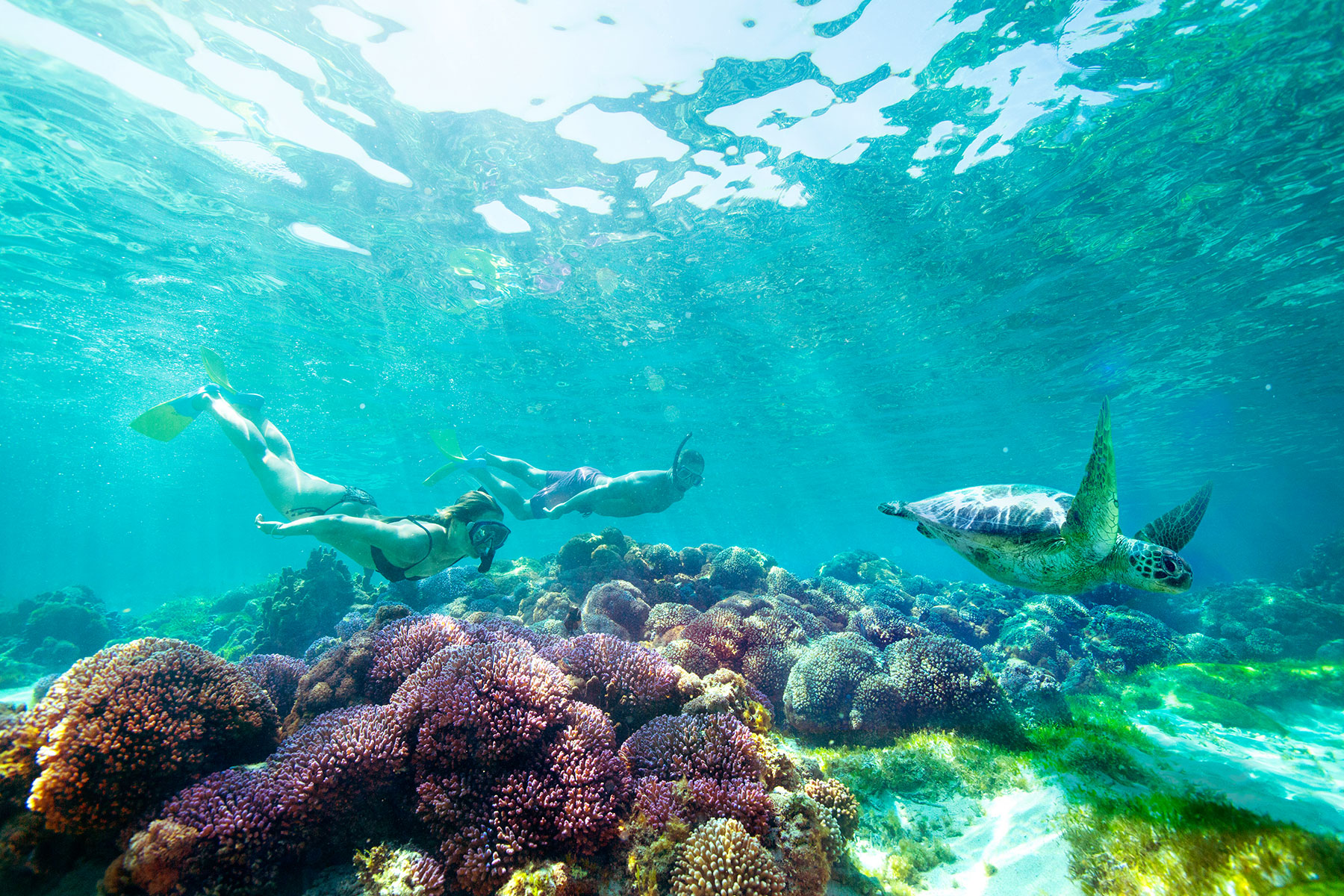 Lord Howe Island, off the coast of New South Wales

Lord Howe Island is one of Australia’s most intriguing islands, with its contrasting, awe-inspiring landscapes and its strict adherence to visitor numbers of just 400 people at once, in order to preserve the island’s precious environments and plant and animal species.

Just 11km long and a mere 3km wide, Lord Howe Island is situated 350km from Sydney and is home to the most southerly coral reef found anywhere on Earth. Over 90 different species of coral make up the reef that surrounds the island, and amongst the reef live over 500 distinct species of fish. These numbers, alongside incredible water visibility, make for amazing snorkelling. Consider checking out Lagoon Beach, Erscott’s Hole and Ned’s Beach during your visit.

Purposefully created by local fishermen back in 1963 (in order to create a breakwater), the 15 sunken ships that together form the Tangalooma Wrecks (just off Moreton Island near Brisbane) have over time become a fabulous spot for a bit of snorkelling action.

With Queensland’s capital, Brisbane, located a mere 40km from Moreton Island, the Tangalooma Wrecks are easily accessible via boat, giving you the option of exploring for just the day or staying a little longer. Nearly 200 different types of tropical fish live amongst the Tangalooma Wrecks, including magnificent lionfish and yellowtail. While snorkelling at the Tangalooma Wrecks, you may also be fortunate enough to spot moray eels, majestic stingrays, marine turtles and/or dolphins. 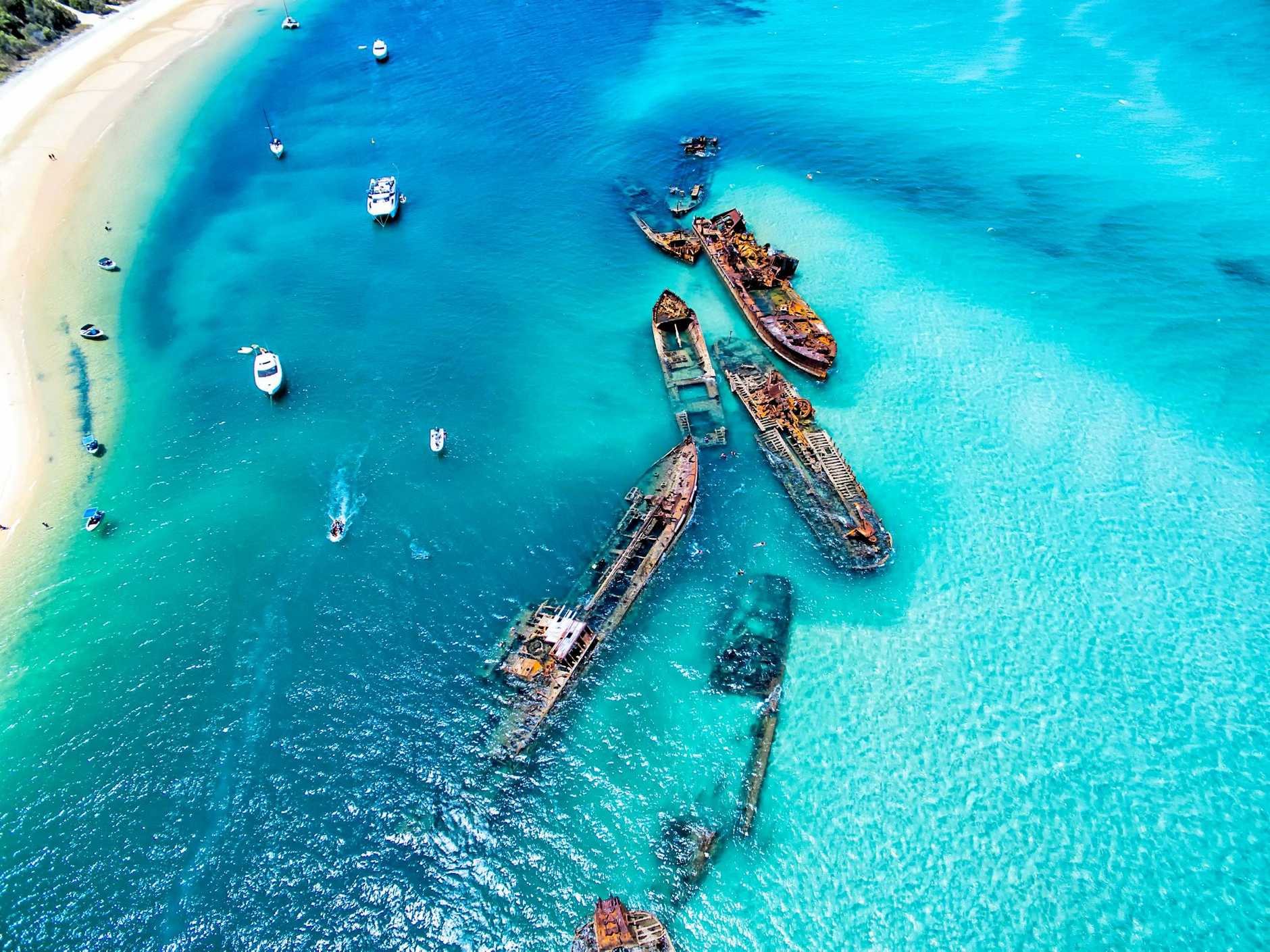 Fitzroy Island is ideally located just 45 minutes via Fast Cat from Cairns in Tropical Far North Queensland and sits right in the heart of the breathtaking Great Barrier Reef. Fitzroy Island is 97% National Park, a mix of both tropical rainforest and coastal woodland vegetation.

Snorkelling straight from the shore of Fitzroy Island, you will have the opportunity to admire an assortment of coral and tropical fish species (including Nemo and humungous gropers), giant clams and marine turtles. Snorkelling at Fitzroy Island is perfect for children and swimmers who prefer to stay close to shore, thanks to its coral reefs sitting just metres from the beach.

If you wish to explore a bit further and adventure amongst secret spots around Fitzroy Island, choose to take part in a 3-hour Sea Kayaking Tour, whereby you will adventure around the island and snorkel private coves and coral reefs that cannot be accessed by any other means. 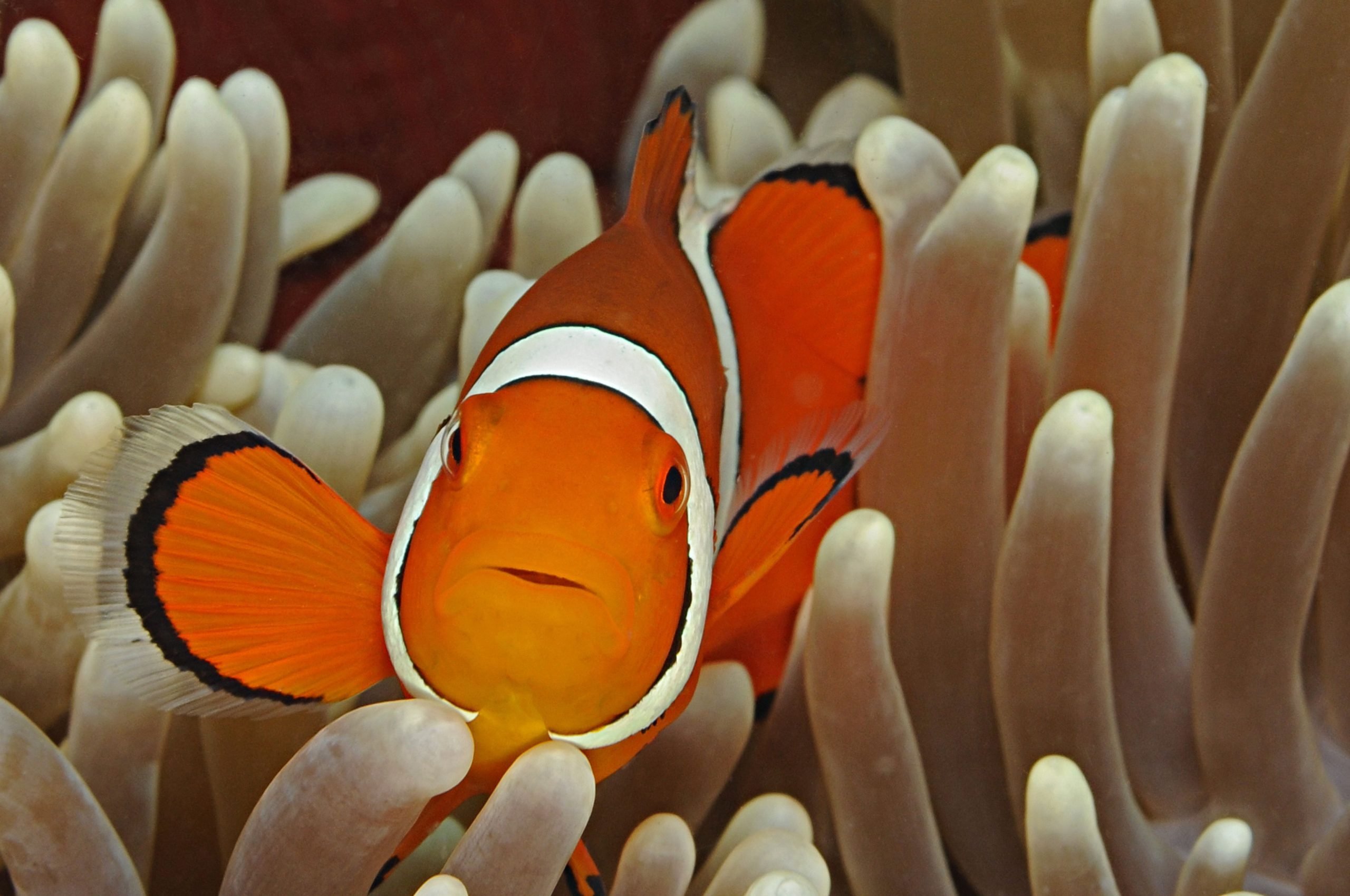 Jervis Bay is a mecca for nature and adventure lovers and is one of the most incredible locations for snorkelling found anywhere in New South Wales. Jervis Bay is a gorgeous coastal town found roughly 3 hours from Sydney via road. Jervis Bay Marine Park itself covers a whopping 100km+ of stunning coastline and is home to the whitest sand of any beach on the planet.

While snorkelling the stunning turquoise water of the Jervis Bay Marine Park, you may spot a variety of different fish species, such as the eastern blue devil fish, pipefish and cuttlefish. Visits from dolphins, seals and even penguins are not uncommon in Jervis Bay, and if luck is on your side, who knows, you may even get to admire an octopus or weedy sea dragon!

The Mossman River is one of the most visited rivers in all of Australia by tourists from every corner of the globe. Located amongst the infamous Daintree Rainforest (the oldest tropical rainforest in the world), the Mossman River is a stunning, crystal-clear river home to tropical fish, eels, turtles and platypus. The Mossman River is located just over an hour from Cairns, known as the gateway to the Great Barrier Reef.

One of the most spectacular and tranquil ways to explore the flora and fauna of the Mossman River and surrounding rainforest vegetation is by participating in a river drift snorkelling tour, solely offered by local tour company, Back Country Bliss. In addition to exploring the animal inhabitants of the river itself, you will also have the chance to spot a mix of gorgeous butterflies, lizards and birds during your adventure. 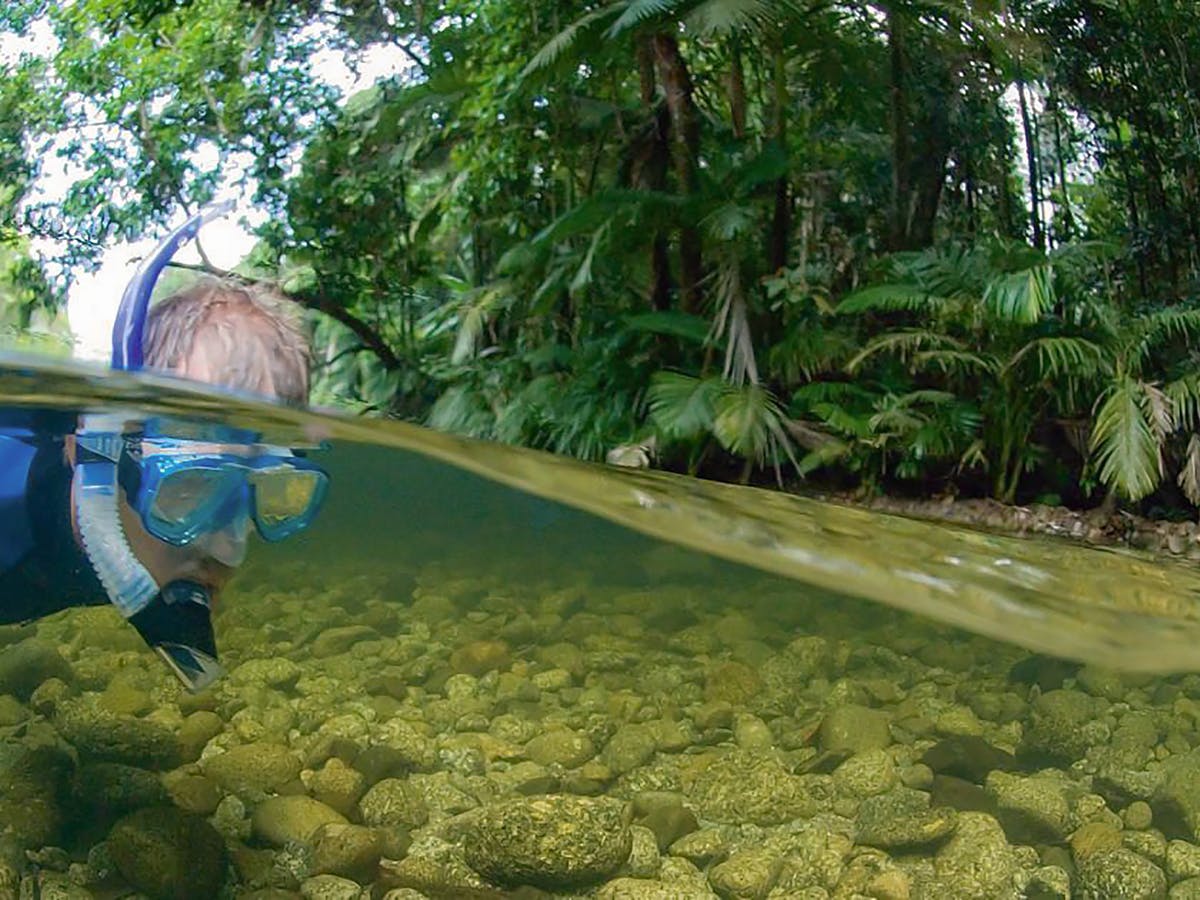 The Low Isles are located 15km north-east of Port Douglas, a beautiful and relaxed seaside town situated an hour north of Cairns in Tropical Far North Queensland. The Low Isles are made up of two separate islands that share the same coral reef, which is comprised of more than 150 different coral species!

The Low Isles are a great option for exploring the Great Barrier Reef if you are tight on time, thanks to the very short journey via boat from the Port Douglas Marina (which can be seen from Port Douglas’ main beach, Four Mile, on a clear day). This location is also well suited to families with young children and those who are not particularly confident swimmers, due to its shallow waters and amazing accessibility to the reef from the water’s edge.

Snorkelling the coral reef that surrounds the Low Isles shall give you the chance to spot a variety of superb tropical fish, marine turtles and gentle reef sharks.

The most southern pick of ours for top-rated snorkelling on Australia’s east coast is Flinders Pier, found on the beautiful Mornington Peninsula (near Melbourne). This spot is very famous for witnessing numerous, majestic weedy sea dragons in their natural ocean environment.

Snorkelling at Flinders Pier means you’re also likely to see starfish, shrimp, crabs and squid, in addition to numerous types of fish. A number of soft corals, sponges and seagrass beds surround the pier and don’t be surprised if you’re also lucky enough to watch a giant ray glide on by!

Brimming with amazing snorkelling spots for beginner and experienced snorkellers alike, Lady Elliot Island (located near the coastal city of Bundaberg) is a beautiful island located at the far southern end of Australia’s Great Barrier Reef. Transportation to Lady Elliot Island is possible from either Brisbane, the Gold Coast or Bundaberg (80km away).

If you are new to snorkelling, ‘The Lagoon’ is one of the best places to start when it comes to exploring the reef that surrounds Lady Elliot Island. With calm, clear waters and gentle snorkelling conditions, The Lagoon is perfect for young snorkellers and those giving it their first shot. While gently snorkelling at this location, you can expect to see numerous types of tropical fish, wondrous sea turtles, giant clams and a variety of colourful and fascinating coral species.

On the other hand, if you have a bit of snorkelling practice under your belt, you might like to check out both ‘Coral Garden’ and ‘Lighthouse’ for something a bit more advanced. Snorkelling the deeper ocean waters of these two snorkelling hotspots means you’ll have the opportunity to spot some of the Great Barrier Reef’s megafauna, such as reef sharks, manta rays, dolphins and even whales (depending on the time of year)! Of course, these locations also won’t fail to impress when it comes to gorgeous tropical fish and beautiful coral.